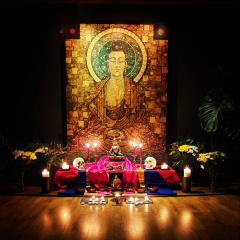 This is a photo of the Padmaloka Padmasambhava Day shrine.

Padmasambhava is known in Tibet as the second Buddha. He is a semi-historical figure credited with bringing Buddhism to Tibet. He did this by transforming the 'demons' that each night tore down the monastery that he had built in the day. For this reason he is associated with transformation, particularly with the transformation of our subconscious 'demons' so that they work for us, rather than against us.

On Padmasambhava day in 1979, Bhante gave a talk at the London Buddhist Centre in which he evoked Padmasambhava, the Tantric Guru.

You can listen to the talk on Free Buddhist Audio here: http://bit.ly/PadmasambhavaDay