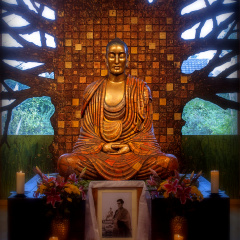 Last month, we held our annual 5-day Open Retreat, an opportunity for men who haven’t asked for Ordination to get a real taste of what it is to be on retreat at Padmaloka.
During this retreat, entitled ‘Changing Ourselves, Changing the World’, Dharmachari Saddharaja from the Cambridge Buddhist Centre gave a set of four talks about the Sutra of Golden Light, a very mysterious and highly revered Buddhist text which Saddharaja has been studying for the past thirty years.

Those talks are now available on Free Buddhist Audio. You can find them here:

If you would like to attend an Open Retreat at Padmaloka next year we have two longer retreats that you can attend: