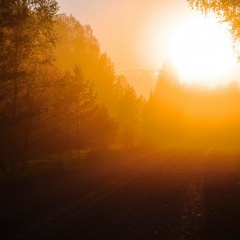 After the success of our short Going For Refuge retreat, themed around the great Mahayana Sutra The Vimalakirti Nirdesa and Sangharakshita's profound exposition of it, we're pleased to announce that we are continuing the theme of Mahayana Sutras in our two upcoming short Ordination Training retreat, with the theme of 'Transforming Self and World: Inspirations from the Sutra of Golden Light'.

We are all looking forward to these retreats here at Padmaloka because they will draw upon Sangharakshita's original talks on the Sutra of Golden Light, which are some of his most inspiring lectures. Also these talks were given in 1976, the year Padmaloka was founded by Sangharakshita, which is significant not least because next year will mark our 40th anniversary.

In an email sent Dharmacharis and Men who have asked for Ordination Padmavajra says: 'In these retreats we will be entering "the profound Buddha region" of The Sutra of Golden Light, drawing on both the sutra and Sangharakshita's inspired exposition of it. During the course of both retreats, there will be talks, discussion groups, special pujas, rituals and recitations, as well as the usual practice of meditation. Above all, we will be opening ourselves - and our world - to the transforming power of The Golden Light.'

You can come on one or both retreats, as they will be stand alone events. These retreats are suitable for all Dharmacharis and men who have asked for Ordination.
The first retreat runs from 11th - 15th of July. Book here: https://www.padmaloka.org.uk/retreats/2015/ordination-training-retreat-2...
The second retreat runs from 27th - 31st August. Book here: https://www.padmaloka.org.uk/retreats/2015/ordination-training-retreat-3...

Yours in the Sangha,
Sanghanistha

P.s. even if you can't make these retreats I highly recommend listening to Sangharakshita's talks which you can find here: http://www.freebuddhistaudio.com/series/details?ser=X15

The Next Phase at Padmaloka: Opening a Hybrid Retreat Centre
The Bodhisattva Ideal - Online Study Seminar - Spaces Available
Dharma Day Programme Revealed
A Garland of Red Lotus Flowers - First Talk Available for All to Watch
May Grace Abound and Victory